Below are the scanned copy of Kerala Public Service Commission (KPSC) Question Paper with answer keys of Exam Name 'RANGE FOREST OFFICER' And exam conducted in the year 21. And Question paper code was '043/21'. Medium of question paper was in Malayalam or English . Booklet Alphacode was 'A'. Answer keys are given at the bottom, but we suggest you to try answering the questions yourself and compare the key along wih to check your performance. Because we would like you to do and practice by yourself. 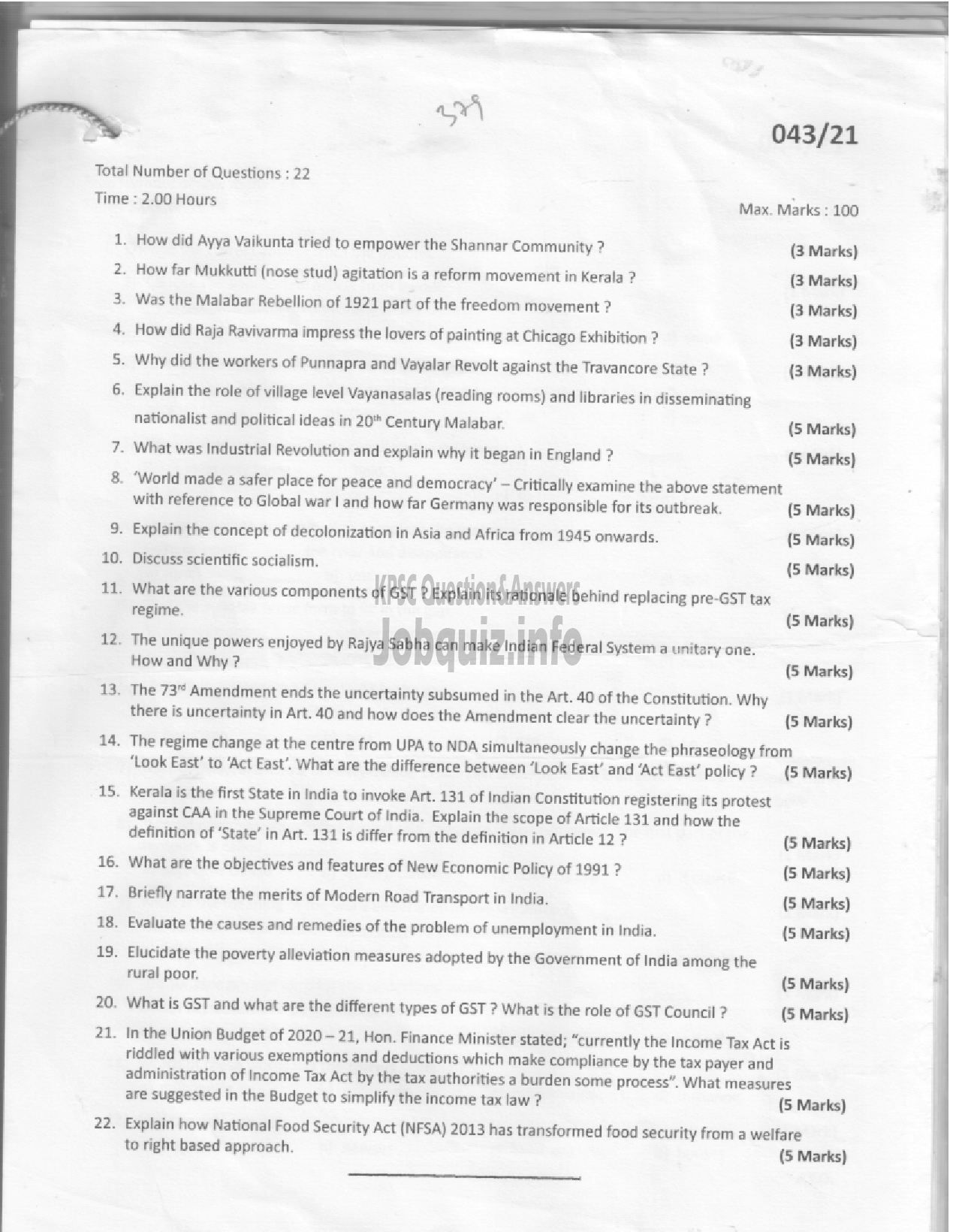 Time : 2.00 Hours Max. Marks : 100
1. How did இருவ Vaikunta tried to empower ടന്ന Community ? (3 Marks)
2. How far Mukkutti (nose stud) agitation is a reform movement in Kerala 7 (3 Marks)
3. Was the Malabar Rebellion of 1921 part of the freedom movement ? (3 Marks)
4. How did Raja Ravivarma impress the lovers of painting at Chicago Exhibition ? (3 Marks)
5. Why did the workers of Punnapra and Vayalar Revolt against the Travancore State ? (3 Marks)
6. Explain the role of village level Vayanasalas (reading rooms) and libraries in disseminating

nationalist and political ideas in 20" Century Malabar. (5 Marks)
7. What was Industrial Revolution and explain why it began in England ? (5 Marks)
8. “World made a safer place for peace and democracy’ - Critically examine the above statement
with reference to Global war | and how far Germany was responsible for its outbreak. (5 Marks)
9. Explain the concept of decolonization in Asia and Africa from 1945 onwards. (5 Marks)
10. Discuss scientific socialism. (5 Marks)
11. What are the various components of GST ? Explain its rationale behind replacing pre-GST tax
regime. (5 Marks)
12. The unique powers enjoyed by Rajya Sabha can make Indian Federal System a unitary one.
How and Why 7 (5 Marks)
13. The 73 Amendment ends the uncertainty subsumed in the Art. 40 of the Constitution. Why
there is uncertainty in Art. 40 and how does the Amendment clear the uncertainty ? (5 Marks)
14. The regime change at the centre from UPA to NDA simultaneously change the phraseology from
‘Look East’ to ‘Act East’. What are the difference between ‘Look East’ and ‘Act East’ policy? )5 Marks)
15. Kerala is the first State in India to invoke Art. 131 of Indian Constitution registering its protest
against CAA in the Supreme Court of india. Explain the scope of Article 131 and how the
definition of ‘State’ in Art. 131 is differ from the definition in Article 12 ? (5 Marks)
16. What are the objectives and features of New Economic Policy of 1991 ? (5 Marks)
17. Briefly narrate the merits of Modern Road Transport in India. (5 Marks)
18. Evaluate the causes and remedies of the problem of unemployment in India. (5 Marks)
19. Elucidate the poverty alleviation measures adopted by the Government of India among the
rural poor. (5 Marks)
20. What is GST and what are the different types of GST ? What is the role of GST Council ? (5 Marks)
21. Inthe Union Budget of 2020 - 21, Hon. Finance Minister stated; “currently the Income Tax Act is
riddled with various exemptions and deductions which make compliance by the tax payer and
administration of Income Tax Act by the tax authorities a burden some process”. What measures
are suggested in the Budget to simplify the income tax law ? (5 Marks)
22. Explain how National Food Security Act (NFSA) 2013 has transformed food security from a welfare

to right based approach. (5 Marks)